Snooty Paws & Disney Home Entertainment are giving away 5 copies of the new Christmas DVD The Search for Santa Paws due to be released on November 10th 2010.

All you need to do is become a member of Snooty Paws website to be in the draw.

There are 5 x DVD copies to be won, existing Snooty Paws members are already in the draw. Drawn 9am Wednesday November 10th 2010.

From the creators of the “Buddies”, Disney’s “The Search For Santa Paws” is a fun-filled holiday adventure that takes us to the beginning of Santa Claus’ legendary friendship with Santa Paws.

In this prequel to the hit holiday classic “Santa Buddies”, Santa Paws and his new canine and kid friends embark on a journey in New York City to find Santa Claus and restore the spirit of Christmas. 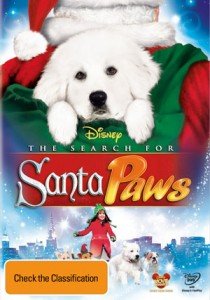 You can leave a response, or trackback from your own site.